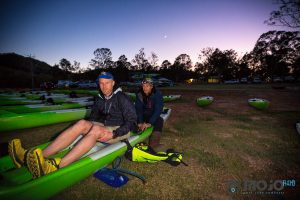 Up for an early start.

Despite having spent close to a decade organising rogaine format adventure racers, opportunities to race them myself have been few and far between.  In fact, the recent Mojo Raid represents only my second time as a competitor, the first being the Mojo event last year.  Taking on a leadership role in the Raid Adventures series with the intention of offering some oversight into the Raid events next year, it was probably my last opportunity for a while too, so I wanted to make it count. 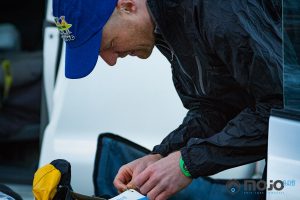 After a massive start to the year including the UTA 100km run, an 8 hour rogaine, the GeoQuest 48hr AR and the Oxfam Trailwalker 100km all within a 28 day period, the body was a little bit broken.  A sneaky knee niggle, back-to-back colds and a partially dislocated shoulder from a crash in the cyclegaine had me missing a couple of races recently including my shot at a tenth Hells Bells, so I was particularly keen to make the start line of the Mojo Raid.  Points towards the rogainer of the year competition also played a factor.  But with virtually no training under the belt for the past couple of months, I warned Alex that it would be a pretty casual approach to the race, which fortunately he was on board with. 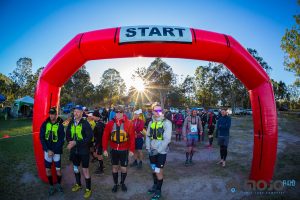 One of the great things about the Mojo Raid is that it alone fills a gap in the racing calendar between the sprint races and the 24hr races, of which there are a few.  The Mojo race offers up the opportunity for teams looking to stretch their limits to a longer race, whilst still being a solid hit out for regular teams.  The disadvantage of a 12 hour race though is that it’s hard to host without competitors giving up as much time as a 24 hour race.  That is, most teams will need a full weekend away to do the race (unlike an 8 hour race where it’s easy to knock it off in a day and be home in time to tuck up in bed).  Unfortunately, no such leave pass was available for me, so it was up at crack of sparrows for the drive out to the 6am map handout.

Arriving at HQ I was met by race director Erren who was a bit stressed about the implication of the howling winds on the kayak course.  I encouraged him to let it go ahead as planned and warn teams just to paddle to their own ability.  Again, the motives were slightly selfish as I figured we were probably the strongest paddling team on paper, and more kayaking would suit my lack of run training than time on the feet. 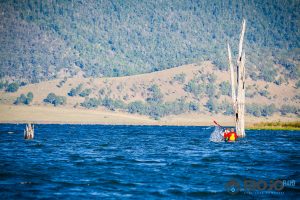 Team Kudos set off on a lonely paddle.

Pouring over the maps, we planned out a big loop of the kayak with the option to drop around 110 points depending on the subsequent legs.  However, that plan was instantly thrown out the window when we turned to the remainder of the maps – there was an absolute swag of easy points on the two trek legs, particularly the second trek leg (about 60% of points in total were from the treks), with the bike leg being relatively short.  The paddle represented only about 20% of the points on offer and we predicted it would take almost a third of the time to sweep it, so we ditched the majority of the paddle to just pick up two easy controls close to HQ.  I was not surprised to learn that most teams were not going out for the paddle loop, with most siting the wind as the major concern, however it did surprise me that the vast majority elected to ditch the paddle all together, particularly when CP10 offered up probably the easiest 60 points of the whole race.  Not as surprised as I was though to learn team Kudos did tackle the full paddle loop and still claim it was worth the effort for the points. 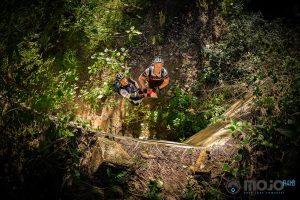 Off the boats and it was into the hills.  When the HQ venue was announced I always knew it was going to be a hilly event.  In just over 11 hours of racing we only covered 65km, but the 3000m of elevation indicates why.  While the total biking was short, I was glad we were kept from climbing all the way up the Mt Mee plateau with our bikes.  The stage 2 bike leg saw our only nav snafu for the day when I confused the water point symbol on the map for a marked feature of an OOB area surrounded by a trapezoidal fence – as you can imagine the conversation between Alex and myself at the time were on two different wavelengths, but Alex got us back in order with just 13 minutes lost. 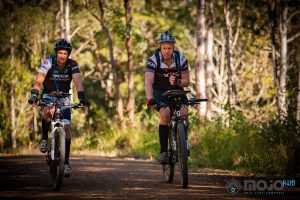 About to ride in to our biggest navigation mistake of the race.

Off the bikes and the climb kicked on in earnest up on to the plateau.  Full credit to the Mojo team for finding some magic little control locations in rocky waterlines.  We were moving much quicker and decided to add another 170 points to our flight plan, just dropping two 30 point controls, including the relatively straight forward control on the peak of Mt Byron.  We spent the bulk of this leg out on our own, although we did pass the Wild Women team coming in the opposite direction and looking strong – by our calculation they were ahead of us on the course and were my pick going in to take the win.  We moved pretty conservatively at first, but after warming into in after a couple of hours, we started to tick along a bit quicker. 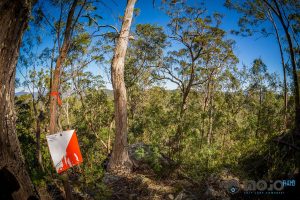 Back on the bikes and we swept the remaining MTB controls before hitting the final trek.  Alex and I spent the majority of this leg working out where we were in the standings between stretches of some great single track running and rocky scrambling.  We figured team Peaky Blinders had missed the 60 point control on the kayak leg, but were good to sweep the rest of the course, which would have us on equal points with the race coming down to time.  Having a 30 minute lead to them going into that last leg was to our advantage we figured.  We had heard the Wild Women team had run to the 60 point control from the kayak leg and were aiming to sweep the first trek leg, but we saw them hit the last transition area 45 minutes after us and figured it would be tight for them to sweep the last leg.  After sweeping the last trek leg with 45 minutes to spare, we agreed there would be no regrets about dropping controls earlier in the race regardless of the result as that was the decision we made at the time.  In the end we had done enough to take the win on points alone with an extra 45 minutes to start on the clean up! 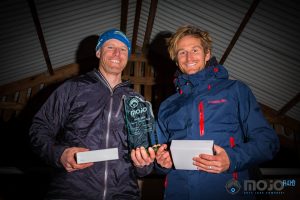 I recently wrote that with the Rogue Raid, I look to put on a racer’s race without necessarily all the bells and whistles.  The Mojo crew have faithfully adopted the all the elements of the rogaine format adventure race that can make them such a successful event, however they go the extra mile with some of those bells and whistles.  You know as an event organiser that you must be doing something right when you have sponsors actively seeking you out to work with you on your race.  I’m excited to have the Mojo race fill a critical spot in the Raid Adventures stable next year and beyond and for working with Jo and Erren to take their race to the next level.  The move to September will be a positive one.  On a personal level, I’m glad to have snuck the Rogue team name onto the perpetual trophy at least once and glad to have Alex to race with and accommodate all my mutterings about a complete lack of race fitness which ultimately boiled down to nothing.  And most importantly of all, the Mojo Raid was a clear reminder of what an awesome community the SEQ AR scene really is.  I’ve had other commercial race directors complain to me about the negativity of the AR community in QLD, but I’ve found it to be the complete opposite – I’m now more than ever excited for the Raid Adventures developments for 2018 and beyond.