UTA100 View From the Pointy End 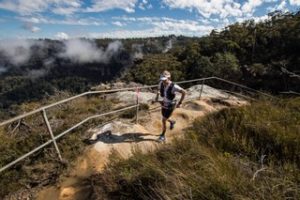 Justin Whitley at the UTA100.

Past Rogue Adventure team mate Justin Whitley joined myself and a motley crew of other Brioche trail runners from Brisbane for an assault on the UTA100 course.  Below is his race report from his unique view towards the front of the field, finishing an incredible 16th place in a field of over 1300 runners in what is now the southern hemisphere’s largest trail running event.  After the race, Justin made the comment that he went for 2 hours at one stage without seeing another runner – a very different experience from myself planted firmly in the middle of the pack.  Enjoy (words by Justin).

I’m typing this feeling like I’ve just gone 5 rounds in the cage with Conor McGregor.  Everything hurts.  But it feels good.

As requested by a few, here’s the low down of my first 100k trail run went… 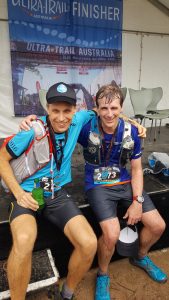 Krispin and Geoff on the finish line of the 22km race.

I managed to get to the start line after a solid 3 month block of training (and probably a bit of over-training) with no real niggles or injuries.  It was great to be surrounded by the Brioche crew who had organised accommodation and transport (thanks Andy) as well have a wealth of knowledge about the race and ultra running in general.  No doubt I was the rookie!

Krispin, Paul and Geoff had great runs in the 22k on Friday which got us fired up for our race the next day but also brought home how tough this was going be – those final 951 stairs to the finish line were no joke!

The weather forecast had been pretty dire all week and due to flooding in one of the creek beds toward the end of the course, the route was altered, taking out a long “easy” downhill section. 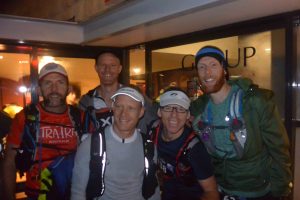 The obligatory “before” shot.

As predicted it was drizzling and a little chilly on the start line.  Off the line, I tried to position myself in the top 20-30 runners, hoping not to start too quickly but also not to get held up through the fast approaching single track sections.  Still in relative darkness I found myself carefully descending the stairs with ultimately the female winner, Lucy Bartholomew (on her 21st birthday).  We had some great chat as we passed through the landslide before parting ways up the Golden Stairs.

Through CP1 at 11.5k and all was going to plan so far… Rob Krar (legend of the sport) effortlessly came cruising past me along Glenraphael Drive after taking an early wrong turn and eventually ran his way into 2nd.  My favourite part of the day was undoubtedly the Tarros Ladders and technical single track to Mount Debert.   A very fun little section, which felt deceptively easy.   The weather was clearing and the views were epic.

Into Dunphy’s Camp at CP2, refuelled and continued to run with Sam and Andrew who I had been with with since CP1.  We skipped Ironpot mountain because of the weather, making this a relatively quick hop to CP3 at Six Foot Track.  I was still feeling good, although aware that my quads were more sore than I would like them to be at this stage of the race.  I was losing time on the downhills but still going well uphill.  By now I had dropped my running mates and a tough climb up Nellies Glen allowed me to pass a couple more.

It was a big relief to reach the Katoomba Aquatic Centre still feeling relatively good at the halfway mark.  I got a big lift from seeing the excited faces of Geoff, Krispin and Paul as I entered CP4.  For the first time I knew where I was in the race (15th), which was great news!  I entered the hall to the open arms of Jess, Greg and Jill who had my drop bag laid out, refilled my bottles and had me back out the door like an F1 pit crew! 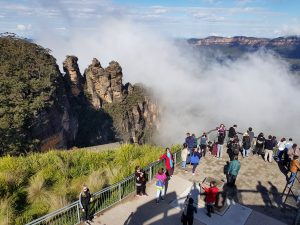 I headed towards Echo point with a renewed spring in my step and the views down the Giant Stairway were amazing.  Running through the Leura forest and Cascades was tough on the already suffering quads with lots of small but annoying and painful steps.  I had also been on my own with not another runner in sight for over an hour and a half and I was starting to lose concentration/focus and slow down a bit.  I filled my bottles at Fairmont Golf resort and stumbled into what was going to be the darkest patch of my day.  My headphones were now in, playing a random 90’s Spotify playlist which was failing to lift my spirits.  I was tired and sore but mostly just wanted to see another runner.  And then like a massive kick in the balls, Tim Tollefson (winner) comes bounding back in the opposite direction on his way home!  Finally 2 runners, Andrew and Wang catch me and we run more or less together to the Queen Victoria Hospital at CP5.  I was struggling to hang onto them and deep in the hurt locker – the elastic band was stretching to breaking point…  Then, to rub salt in the wound, they sent us on a 1.5km out and back before letting us access the checkpoint. 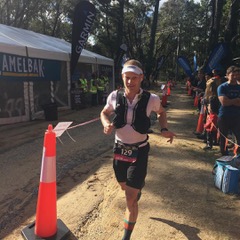 Running through CP5 at the hospital.

Fortunately Jess and her folks were ready for me in my dilapidated state.  All I had to do was stand there for a couple of minutes while my bottles were filled and words of encouragement filled my headspace.  The final push home was back past the golf course and through the tricky Leura forest again. Andrew had taken off and Wang had had a leisurely stop at CP5, which put me in 16th place.  Getting passed on the downhills and passing others on the uphills was the story of my afternoon.  I was pleasantly surprised to run up to Mike Wardian (another ultra marathon legend) just before Fairmont.  I knew it was him because he was wearing a cap backwards saying “go Mike”.  He was having a tough day after doing the UTA 951 stair climb the day before.

The next highlight for me was crossing back past Pete, Enda, Shaun and Liam who were all looking strong and obviously having good races.  I hadn’t seen Andy but assumed we had just passed each other where our trails had separated (but unfortunately Andy had retired with an ankle/quad combo injury).

Wang, Mike and I ran together until about 4k to go when Wang took off, never to be seen again.  The only word I heard him say all day was “careful” when he was running behind me and I stumbled or lost my footing.  Mike was hating the stairs this time and lost a fair bit of ground before the finish.  As I approached the finish line I heard and saw the Brioche crew cheering which lifted me out of the pain cave and across the line.  I actually saw another runner in the finishing chute so I put in a final big sprint and took him just before the line only to realise that he was not in the same race as me but was in the 50k event which obviously fed into the same finish.  Idiot! 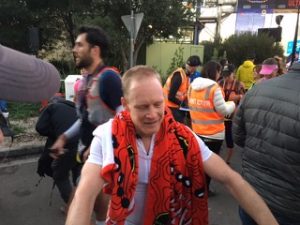 Spent on the finish line.

So my final result was 16th in 10:44.  Better than I could have hoped for!  I was very lucky to have such great assistance over the entire weekend and it was a memorable experience for so many reasons including…

Shaun’s carbo-loading tuna/cheese pasta bake, Andy’s logistics and vast UTA knowledge, Enda’s Irishisms, Liam laughing at the “poor pricks” cramping and vomiting up the stairs (only because he’s been there), Geoff and Krispin’s awesome support on race day and having Jess, Greg and Jill at the finish line.

Thank you all for your interest and support.  Until next time…

← The Rogue Raid Wrap
Next Stop in the A1 Series: GeoQuest →