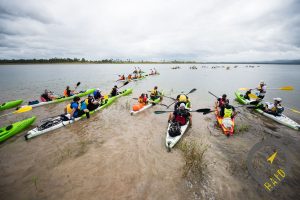 Teams hit the water at the start of the Rogue24

In what has grown to become one of Australia’s largest adventure races, a total of 188 competitors from as far away as Western Australia, Victoria and Singapore descended on the picturesque shores of Lake Wivenhoe for the 2017 edition of the Rogue Raid.  Now in its eighth year, teams were faced with the option of a 6 or 24 hour course, taking in the lake waters, cross country navigation of Wivenhoe Hill and tracks of Esk State Forest and the Brisbane Valley Rail Trail. 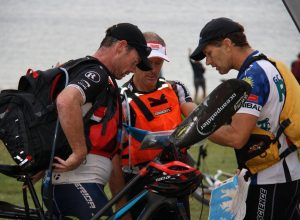 Kicking things off with the six hour race, a multitude of strategic options for teams to work towards their strengths saw a close run affair with only 20 points separating the top three teams.  Ultimately it was team Blowfish from the Gold Coast edging out teams Happy Ending and Rochedale Runners to go two wins from two attempts after a victory in the Rogue6 back in 2012.  Mixed open winners in the Rogue6 were novice team Virgin Racers on a very credible performance for their first rogaine, with the ever consistent team The Azers wrapping up the women’s title. 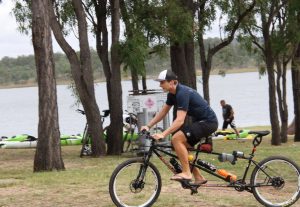 Looking towards the premier 24 hour race, the 2017 Rogue Raid was billed as one of the most competitive editions to date.  Some last minute reshuffling of teams due to injury saw the all male category open up a bit, with a tightening of the field in the mixed category with veteran Gary Sutherland entered in a mixed team with Port Macquarie athlete Alison McLachlan.  The early pace was hot with all the lead teams sweeping the first kayak leg in short order, coming in as bunch within 15 minutes of each other.  Last year’s winners team Explore were forced to abandon the race shortly afterwards due to the effects of a pre-existing illness.  Strategy would quickly come into play with CP17 posing a conundrum for the lead teams – collect it and risk wasting valuable time for later in the race, or skip and it miss the big points in lieu of more time to collect additional points later.    Teams Tri Adventureish, RUSH and Traces of Nuts all opted to drop CP17, while Tiger Adventure Surprise and team Husband and Wife collected it.  Only time would tell what would be the right call. 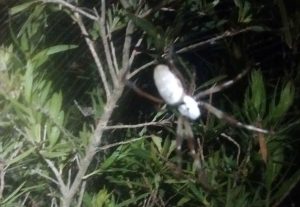 A familiar sight to all Rogue competitors.

As the sun dropped below the horizon, teams headed out on bike for a ride along the Brisbane Valley Rail Trail out to Esk State Forest.  Numerous reports of wildlife encounters along the course were made including friendly spottings like koalas, kangaroos, goannas and a pelican rookery along with less friendly encounters with “a billion” spiders, an angry horde of wasps and sleepmonsters. 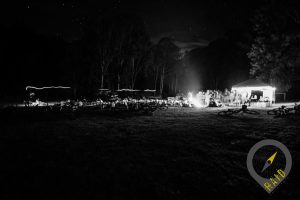 A mountain bike orienteering and trekking loop in Esk State Forest in the dark of a moonless night proved a real test of navigation for some teams.  The top teams took it in their stride, but those further back in the field struggled in the maze of tracks, with one team even having to resort to cracking out a GPS and high tailing it for home.  With a darkzone imposed on the final paddle leg due to permitting reasons, it was team TriAdventureish who arrived first with 40 minutes to spare before the darkzone lifted, but one check point down.  They had a nervous wait before they could start paddling, but by the time they hit the water, no other team had come in.  They went on to sweep the final paddle leg with just on 2 hours of race time to spare, but one CP short of a full score card.  They then had to wait it out to see if they had done enough for the overall win.

Ultimately, it was the Sunshine Coast pairing of Dave Schloss and Alex Austin from team TriAdventureish who took out the overall 2017 Rogue Raid title.  Tied on score, but finishing 78 minutes was another Sunshine Coast team RUSH – this is RUSH’s fifth runner’s up placing at the Rogue24 (to go along with their two victories and a third place).  Taking out the mixed title was team Tiger Adventure Surprise made up of Gold Coast racer Gary Sutherland paired with Port Macqurie’s Alison McLachlan, managing to place third overall.  In fourth (and second mixed team) was Sydney team Traces of Nuts who are in final preparation mode before travelling to race in China next month.  Port Macquarie Husband and Wife pairing of Michelle and Chris Delany took out fifth (third mixed), while line honours in the women’s title and a very solid sixth place overall all went to the Mountain Designs Wild Women teams also from the Sunshine Coast.  First veterans team and ninth overall were Brisbane based team Bicycles Without Bruce. 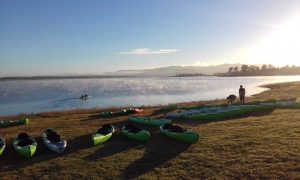 Second place team RUSH paddle out onto the final leg of the Rogue24.

A full wrap of results can be found on the QRA results page here.  You can also find a copy of all the maps along with a swag of other resources including team race reports and google map files.  A library of excellent photos courtesy of the Mojo crew can be found here.  For the Strava tragics (myself included), a flyby of the race can be found here.  A big shout out goes to the large team of volunteers who help make this race happen.  I strongly encourage everyone to volunteer at a future QRA event.  Volunteers get a guaranteed place in the Rogue Raid in 2018 which is a highly sought after prize given the event sold out in less than ten minutes this year.  There were a number of lost property items which are now located in the QRA shed (caps, map cases, etc).  A number of the provided PFDs have gone missing, so if you accidentally took one home with you, please arrange to have them returned. 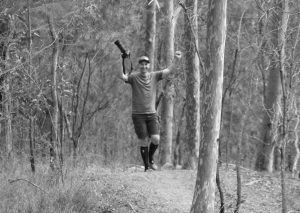 The Rogue Raid is set to return in 2018.  The tentative date has been marked as the weekend of 21-22 April 2018 pending permit approvals or any logical objections.  Thanks to everyone for making this one of the most successful Rogue Raid events to date.  As I mentioned in my race preview, this is a race for all comers and the positive vibes out on the course were outstanding.  While this race wrap up focused on the winning results, everyone walked away from the race with their own stories of trials and tribulations. I look forward to seeing you all at the next Rogue Adventure.

A collection of race reports will be collated here.  Send us through your stories and we’ll post them up: